As an Organic Craft-Brewer, Haggerty is Brewing For Success with SEAL-like Determination 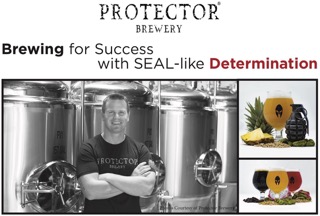 Flashback to 2010 in Iraq with Sean Haggerty's SEAL team returning to base camp upon completion of a successful mission, thirsting for a cold beer, while knowing full well that none would be found in the marketplace. Haggerty took corrective action and called stateside, requesting friends to send over the necessary ingredients for a home brew. Soon thereafter, pouring from an improvised Gatorade cooler, came the first rendition of a Protector brewed craft beer. With the seed or "hop" if you will, now planted in mind, Haggerty began to envision that upon completion of his service the with the SEALs, there existed the opportunity to expand his vision and begin a craft brewery upon his return to San Diego.

With some 160 or more craft breweries and pub houses throughout the county, the competition would be keen and grow increasingly intense. Accepting the challenge, Haggerty and his wife Cory, joined by a select few enthusiasts, decided to  venture forth. Adding a bit of spice to the challenge, while adhering to their steadfast belief that conventional farming is seriously harmful to the environment, they chose to go organic, which turned out to be a real game changer. It took a number of years to find the best organic ingredients available, which became a significant part of the effort. Complying with the strict regulations that come with acquiring an organic certification as U.S.D.A. organic was the greater challenge. That successful effort awarded Protector to be the first organic craft brewery in San Diego.

For Haggery and team, knowing that every ingredient that goes into their beer is a natural, non-GMO product has been the greatest reward from what at times seemed an insurmountable challenge. Having experienced SEAL team training, combined with several deployments into harm's way, the successful outcome was never thought to be a matter of whether, but when. The friendly patrons and staff at Protector make it a pleasure to be on hand for what has turned out to be a remarkably great tasting variety of brews, spawned from the desert sands of Iraq.