Cruisin' To Be Cruise 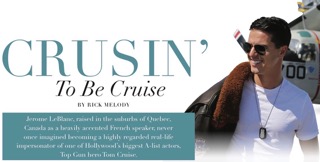 While in Quebec, LeBlanc’s passion had always been in the arts, and he felt confident in his ability to pursue a degree in architecture in Los Angeles, California, especially with English being so prevalent in schools throughout Montreal. Yet shortly after arriving in LA, the entertainment capital of the world, he began hearing how he looked like Tom Cruise. Only once had anyone in Canada ever compared him to the "Risky Business" actor.

Remembering dressing up as Maverick from "Top Gun" for a 2011 Halloween party, where the reactions were so immediate, so positive and so inspiring, LeBlanc decided to take it to the next level. He was not allowed to work off  campus on his student visa, but as an artist he could perform for donations. He slipped into a green flight suit, and chose Hollywood Boulevard, ironically nicknamed the Boulevard of Broken Dreams as his first freelance gig.

On the first day, Fox News interviewed LeBlanc, and a look-alike agency offered their services. Such a prosperous beginning led LeBlanc to pursue the impersonator role as a vocation, and in the 8 years since, he has landed multiple gigs each week throughout the country. His assignments have expanded beyond the sidewalks of Hollywood to include corporate parties, trade shows, weddings and birthdays.

As a rather shy, most likable guy, LeBlanc considers himself an illusionist, enjoying his ability to bring fun and laughter to others. He credits his street performing experiences for molding him into the confident performer he is today. In creating his uncanny act as one of the best Tom Cruise impersonators in the industry, he feeds off  the reactions of strangers from all over the world and cherishes the reactions from "Top Gun" fans. His striking resemblance to Cruise reminds his audiences of some great times in their lives, as clearly evident across their faces and in their smiles.

LeBlanc does not rely solely on his charming manner. He takes his role quite seriously, moving beyond simply donning the "Top Gun" outfit to also taking on the Tom Cruise persona. Overcoming his heavy French accent to mimic the Hollywood actor’s voice was LeBlanc’s greatest challenge, followed by the Cheshire cat smile, the body movements and certainly the vocals to “You’ve Lost that Loving Feeling.”

As the illusionist, LeBlanc easily wins over the ladies in the audience, and while some of the men in uniform question his use of the military garb, others are more concerned with their female companions excitement when LeBlanc enters the room. Overall, everyone enjoys his authentic portrayal of such a renowned star. Given the fortuitous opportunity to play such a role, LeBlanc’s rendition might well be “I’ve Got That Loving Feeling.”