An Interview With Zandra 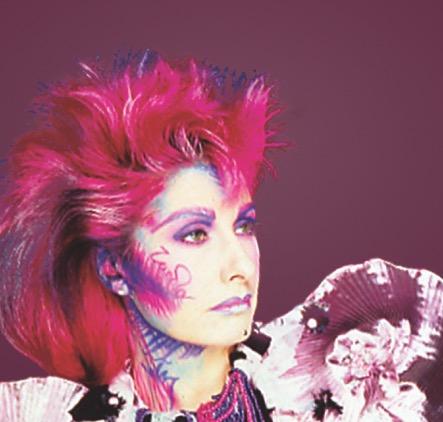 "It was on a remarkably clear day in the gardens of Buckingham Palace that in February 2015, Dame Sandra Rhodes was granted Damehood by Queen Elizabeth of England. "Never would have I thought at age 12, chalking in "Doodlebugs" in the London shelter with V2 rockets flying overhead that I would one day be standing in the gardens at the palace with such recognition. I didn't even know what a Dame was until much later in my life."
Having just returned from one of her frequent travels to London, Zandra was found at her studio working on designs and most willing to sit for a while allowing for a glimpse into what has been a most fascinating journey over the years.
Q: What were your first childhood memories?
A: I was born in Chatham, England during the war. My first childhood memory is drawing chalk butterflies in the air-raid shelter in the garden. My Mother held me up to listen to the "doodlebugs" which were the V2 rockets heading for London. They would fly straight overhead and only an occasional one or two dropping from the sky.
Q: Have you any siblings and which career path did they choose?
A: One sister who chose teaching in domestic science and also dressmaking.
Q: Understanding that your Mom.a fitter for the Paris Fashion house introduced you to the world of fashion, at what age did it strike you that fashion would be the chosen path?
A: I trained as a textile designer and it was in my 20's that I decided that I would have to take those designs into fashion to make this all work. Textile design was very limiting, while the world of fashion was limitless to me as a young designer.
Q: your designs from the start obviously were very unique. From where did you the inspiration derive?
A: From that point of view, I was always painting and drawing and that led me to different designs. it wasn't any one thing that led me in any one direction. I actually think it came from within.
Q: Having been advised by the British manufacturers of the time that your textile designs were too outrageous, is that what led you to the United States?
A: During that phase of my life, while designing textiles, I taught school to earn a living. I had studied at the Medway College of Art in Kent and also at the Royal College of Art in London, however, a very dear friend in the design studio thought that my designs would frighten away buyers, and right she was. We so happened to meet Vanessa Redgrave, who thought the designs favorable and who funded us the money to open a shop in London. It stayed open for about a year. I then decided that I would make a collection of my work, and actually it was two American models who encouraged me to head to the United States. My designs were thought to be outrageous to most buyers in the UK at the time, so it was across to America. English Vogue, did favor my designs, introduced me to Diane Vreeland of American Vogue, which opened the door for me. She chose Natalie Wood to model my clothing and so it began. I was then on the circuit, going from London and back to America doing shows for Sak's Fifth Avenue, Neiman Marcus and the like.
Vogue, New York had Natalie Wood model for my new designs and we were off to the races.
Q: With that in mind, having the British fashion houses reject your designs initially, were there any hard feelings after gaining such instant success in America?
A: Not at all. I then returned and found a backer who helped me start a new shop in London, which I kept open for about 15 years. No hard feelings whatsoever. I felt very fortunate overall and relished in the work that I was able to do in fashion.
Q: You certainly have developed a style, recognizable to all. Did it all begin this way or was their a Lady Gaga moment?
A: It was there from the very beginning. As my original partner so advised, my designs would frighten away the buyers. Look at it now and you would think that colored hair is close to the norm in many circles.

Q: You absolutely have a vibrancy about you. Can only imagine what you must have been like at age 22! What keeps you firing on all 12 of those cylinders?
A: I love my work and live with a workaholic who drives was as well. I really do enjoy what I do, and sincerely enjoy coming to the studio. Years ago, I was approached by the San Diego Opera to do design costumes for the Magic Flute and thereafter went on to design for Bizet's Pearl Fishes back in 2004. More recently, I worked with the Houston Grand Opera on Egyptian-inspired designs for Verdi's "Aida" which showed at the English National Opera in 2007 and was the opening and the close for the San Francisco Grand Opera in 2011. It was performed here in San Diego in 2013. It just keeps coming and I just keep going.
Q: Had you been as enthralled as the rest of the world with Downton Abbey?
A: I certainly am acquainted with Lord Julian Fellows who has written the script and actually have designed dresses for his wife. The producers have done a fine job selecting the actors, particularly Maggie Smith. I have caught some of the series here and again, especially so if shown on an air flight where I have nowhere to go and not much else to do en route.
Q: Plans after retirement?
A: You will find me in my studio at my desk on that given day. I would not know what to do if I retired.