Luxury On Your African Safari

The Choices Are Many; The Differences Very Real 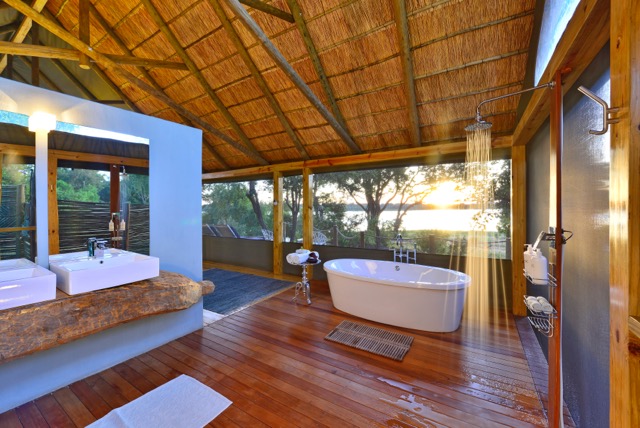 How many times does one visit Africa, if at all? That visit is a once in a lifetime experience for the majority of travelers and twice perhaps, for the very lucky few. Should that trip not be planned then in a manner that makes your dream safari a masterpiece, each day more splendid than the last and the setting one of near perfection? Properly arranged, all of your memories will be great memories to be rekindled for a lifetime.

Spread the cost of a luxury journey over a lifetime of truly grand memories and the holiday not only becomes manageable, it becomes a bargain because of its value. Given the option, would you choose a safari camp that is overrun with visitors, with the camp or lodge a crowded series of adjoining rooms, adobes, rondavels or tents, and each meal taken sidestepping along a buffet line? Or on this very special trip, might you rather prefer a limited number of accommodations on a private concession with perhaps as few as 14 guests, including candlelight dinners, fine wines and sumptuous cuisine served table-side in a serene environment, save of course for the occasional roar of a lion or the trumpeting of a nearby elephant.

Understandably, the second choice will not be an inexpensive journey, but it will still be a bargain. The moments of assured pleasure and the knowledge that the memories from this one tour will bring treasured moments to recall for years on end makes the added cost reasonable.

On your first safari adventure in search of animals, would you prefer sharing a van with some 6-8 other travelers, having just left a crowded buffet and being relegated to using roadways and not allowed to traverse the grassland in search of animals? The Land Rover used on your safari - will it be a newer model, recently off of the assembly line or one with shocks and seat springs in need of serious repair and obviously used by several operators before arriving at your bargain-priced campsite? Such seemingly small concerns really can make a difference in your overall enjoyment and comfort while on holiday.

A lion is not a lion after all. It depends on where and in what circumstance one comes upon this mighty predator, that being the female of course. Should you be at a large camp that adjoins several others, you will find that this lion, who may have seen thousands of such visitors previously, lies on the ground totally unmoved by the presence of the many vans or vehicles that surround it. Imagine yourself trying to get a good photo of a sleeping lion without getting another vehicle in your photograph. Envision yourself edging for position just to gain a good sighting of the animal along with many others trying to do likewise.

Might you instead not prefer being on a private concession wherein there is one, perhaps two other Land Rovers searching for game in the same locale? Might you not prefer being where the wild animals are truly wild and not accustomed to hordes of travelers traversing their footpaths on a daily basis? Won’t you enjoy a setting where the tents are so grand, that one has to touch the canvas to be reminded that they are in a tent? Where your safari outfit, worn and a bit dusty after a day in the bush is found cleaned and neatly folded at bedside the next afternoon. Where the bread is freshly baked minutes before dinner, local wines served inclusively upon request and each meal tendered to a limited number of guests who share the same dining table for their meal and know each other’s names.

No doubt that the cost for such a grand safari will be higher, but the quality of the experience will be also higher, ever more genuine, ever more luxurious, and as a result, ever more lasting. Thus the value of that dollar you spent will be ever so much more meaningful. Given the enormity of the difference between traveling on safari at average or below-average camps and what can be experienced on a luxury safari, at truly grand  camps, simply cannot be overstated.

Safari in Africa certainly rates as one of the finest journeys one could ever wish for in a lifetime of travel.  It is much better to take one step back, delay your journey if necessary, but do not deny oneself the pleasure of a luxury safari in the wonder that is Africa. All things considered, a luxury safari is a wise investment that reaps heartfelt, glorious memories for many years to come. Delay if you must, but denying yourself such a magnificent experience you should not.

Since 1989, First Cabin Travel has sent travelers to destinations worldwide with the mainstay of bookings derived from repeat clientele and their enthusiastic referrals. CA Reg: 2016168-40