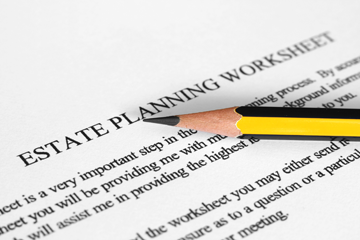 How best to put this? We’re all going to leave the planet at some point, and while you may not want to think about it, never mind, talk about it, you’re not immune. So what then? You might think your estate will get miraculously sorted out, and that squabbling relatives are just the stuff of TV dramas.

“You want to be the one who’s in control of what happens to what matters most to you, such as minor children, dependents, financial assets, even your own health care decisions,” he says. “Without a properly planned estate, or legacy strategy, your assets could be subject to the time-consuming, expensive and very public process where relatives and creditors can gain access to records and even challenge your will.”

And yet, according to a recent survey by Edward Jones, while 77 percent of Americans believe having such a strategy in place is important for everyone – not just the rich – only 24 percent have even taken the most basic step of designating beneficiaries for all their accounts. To avoid even one of those “then what?” moments, here are some of the key elements to consider:

• A Will. What’s the worst that can happen if you haven’t written one? “Plenty,” as US News & World Report has written, “depending on your situation, the personalities of the people in your life – and the estate laws that your state has on the books.”

In other words, not only could some court judge be deciding who gets everything if your family can’t agree on their own, but he or she could also wind up appointing a guardian for your minor kids.

• A Living Trust. Do you own out-of-state property, such as a vacation home? Or maybe you want to leave more to one child than the others? Assets you register into a revocable living trust are there for your benefit during your lifetime, can be managed by your named trustee if you become incapacitated, and are harder to contest than wills.

• A Health Care Directive. In the same way that you don’t want some judge deciding who gets your Beatles albums, for instance, you definitely don’t want the courts having to settle an inter-family fight over whether you’d rather go on living in a vegetative state or be taken off hospital feeding tubes.

Shuddering at the thought? Then you’ll recognize the importance of appointing someone to carry out your medical treatment wishes in the event that you’re no longer able to communicate or incapable of giving consent.

• Beneficiary Designations. Suffice it to say that you don’t want to be among the 76 percent the survey found hadn’t even bothered, for starters, to fill in a beneficiary’s name on accounts such as their 401(k) or other savings.

For some, estate planning is as simple as a written will. A local financial advisor can work with you and your tax and legal professionals to employ a strategy that, among other things, potentially avoids the court process known as probate – there, we said the “P” word – while also making sure that your investments are aligned with your goals.