Bhutan ~ Land of The Thunder Dragon

A Tiny Kingdom Known To Be The True Shangri-La 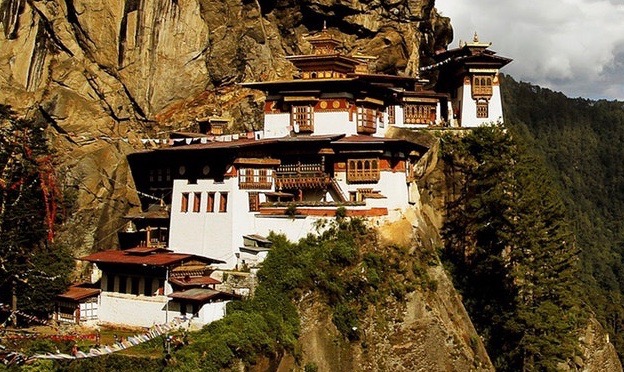 Primarily a Buddhist nation, landlocked between its neighbor giants, India and China, this cloistered nation of less than one million inhabitants has its focus on the preservation of its gross national happiness. As was viewed on the chalkboard within a neighborhood primary school, the words were written that should you see someone without a smile, give them one of yours. It is a mountainous country, 70% of which is forested with the beauty of the land and the genuine sincerity of its populace a main attraction.
The monasteries or Dzongs are fortress like structures, wherein the monks pay homage by daily rituals. One of the major highlights within the country is a trek or pony ride to the Paro Taktsang or Tiger's Nest, clinging to cliffside, well above Paro Valley. It is from this edifice during major festivals that the gongs begin to sound and the chants of the resident monks begin to cascade down the valley floor announcing the commencement of festival activities.