Very Likely To Melt Your Heart 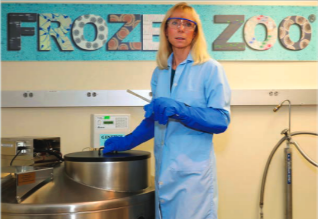 Bringing back the Northern White Rhino certainly would be cause for celebration, and the Beckman Center at the San Diego Zoo Institute for Conservation Research (ICR) is a key player in the collection and preservation of living cells taken from endangered species worldwide. Established in 2004, it has a variety of research groups actively engaged in conservation genetics, reproductive sciences, disease investigations, and population sustainability, with the Frozen Zoo® a rather fascinating component of that effort. Marlys Houck, a senior researcher at the San Diego Zoo Global met with us for an in-house view of their facility located in Escondido a few miles from the Wild Animal Park.
Prior to the completion of the center in 2004, were there on-going efforts to collect and preserve the living cells of endangered species?
In the 1970's, Dr. Kurt Benirschke, who had a keen interest in chromosomes, and the questions they might answer in a variety of animal species, set out to collect cells on as many species as possible to analyze their chromosomes. At that time animal cell culture was a fairly new field and the chromosome number of many well-studied animals was unknown.
In order to obtain chromosomes, you need living cells. Dr. Benirschke realized that since we had the ability to grow cells from a small piece of skin taken after an animal died, it was a good idea to preserve the cells with methods that keep the alive. His foresight led to the creation of the Frozen Zoo® in 1975 wherein the living cells would be banked indefinitely in liquid nitrogen, anticipating that the cells might have even more value in the future as science progressed.
Certainly science has progressed, as I would imagine have the efforts of living cell preservation?
Right on both accounts. Arlene Kumamoto, one of the first technicians became an expert in the cell culture of hundreds of mammal species. The collection has now grown to include birds, reptiles and amphibians. Currently, there are nearly 1,100 species/subspecies and 10,000 individuals, with all cell lines grown and frozen by about 20 technicians over the past 40 years. By 1980, our reproductive sciences team under the guidance of Dr. Barbara Durrant began adding germplasm (sperm and ova) to the collection.

Is this collection primarily from the San Diego Zoo and Safari Park?
It is a continued process of collection that has expanded worldwide. Many other zoos send us small skin biopsies opportunistically after an animal dies or when it is in for examination or surgery. We've also received samples from collaborators working with wild populations in Madagascar, Zimbabwe, Oman, Mongolia, Mexico and other regions of the world. We never know what samples might come in each day.
Are these samples received globally in prime condition or given the conditions in the field or missteps in collection ever compromise the quality of the sample rendering them useless?
Samples must reach us quickly, ideally less than 5 days after collection so they can be incubated at the right temperature with nutrients and antibiotics. Contamination from bacteria or fungus on the samples can destroy the cells. If the tissue freezes during transport that will also kill the cells, so it's more challenging to get samples in good condition from remote locations.
Is the focus at the Center primarily on endangered or near-extinct species?
From our perspective, we want to collect as many species possible. The more endangered one have the highest priority, but we don't know which currently stable populations could suddenly decline. For example, dozens of amphibian species have gone extinct in the last decade in part due to the rapid spread of a chytrid fungal disease. We try to collect every species right now; the pressure is so much greater once only the last few individuals remain. Receiving a sample doesn't guarantee that we can successfully establish cells as each species has different requirements. It's a skill that takes years to learn, and although we as a team at the Center have a total combined experience of nearly 60 years, accumulated between the 4 of us who actively grow the cells, there is still plenty more to learn.
What real concerns have you over-seeing this priceless collection of living cells?
I learned from Arlene Kumamoto, my mentor in the lab, that in the early days of operation, all of the cells were contained in on freezer, which on one weekend thawed due to power failure. All cells were lost. Thereafter, duplicate cells ere contained in separate freezers, however, housed beside each other within the same room. Fortunately, we now house duplicate cells in two facilities some 35 miles apart and we are automatically alerted by text if an alarm sounds, at any hour. The safety of this collection literally keeps us awake on some nights.

How do you define the difference between the collection and use of DNA and actual living cells?
The cells have a much broader use than DNA, and are actually a source of high quality DNA. Avial of cells can be removed from the freezer and grown into more cells, so it's nearly an  endless resource. The living cells can be reprogrammed into stem cells, used for cloning and for chromosome analysis, none of which can be done with DNA.
Is the Center comprised mainly of staff or have you volunteers as well?
San Diego Zoo Global has an extensive volunteer program and all 8 strategic areas of ICR have benefitted from volunteer services. Currently, we have close to 100 volunteers supporting our projects.
Does you funding come primarily from research grants or private donations?
Funding for many of the research projects at the San Diego Zoo Global come from a combination of private donations and research grants. The Nemeth Foundation for one provided over 1 million dollars in assistance for which we are ever so grateful.
Can a visitor to the Safari Park also arrange a visit to the Center?
The Beckman Center is closed to the public, however, our Community Engagement team offers a unique field trip program where students can engage in hands-on labs to learn about our current research projects. For more information see: https://institute.sandiegozoo.org/opportunities/exploring-conservation-science-field-trips

Most have learned of the recent loss of the last male Northern White Rhino "Sudan." Now, with only 2 females remaining, this species is nearly extinct. Can you foresee a timeline for creating an embryo that will return that species back to life within its former habitat?
The Center holds living cells from "Sudan" and 11 other Northern White Rhinos as well as sperm from 2 males. San Diego Zoo Global developed a Rhino Rescue Program, which is trying several approaches using these resources to save this iconic species. It's a very ambitious undertaking that has never before been attempted, but if everything goes as planned, they hope to have a rhino birth in about 20 years.
Would that not be cause for celebration?
The mission of San Diego Zoo Global is saving plants and animals worldwide and it would be an immeasurable loss if the Northern White Rhino can't be saved. Ultimately, the decline of species should be prevented before they get to that point. But yes, if we can bring back the Northern White Rhino we are fulfilling our mission in a way that few, other than maybe Dr. Benirschke could ever have imagined.
Photography by Gilda Adler
http://gildaadler.com