The Magnificence of Angkor 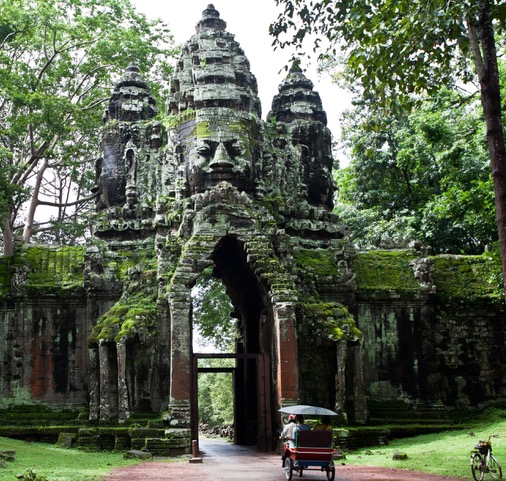 The year 1970, the setting, the departure lounge at Don Meaung International Airport, Bangkok, Thailand, the destination, Siem Reap, Cambodia, site of the ruins at Angkor.

The decade of the mid-60’s to mid-70’s was an idyllic time for international travel. It was the dawning of the “jet-setter” age with the advent of the Boeing 707 international carrier recently born and years before the onslaught of the Boeing 747 that funneled hundreds of thousands of tourists upon the global landscape, forever changing what were isolated regions of the world into destinations newly opened to the world of tourism. There came an innocence lost as busloads of touring passengers descended upon villages worldwide, cameras at the ready.

In Bangkok in earlier times, an airline would place its boarding chart in the lounge area with numbered tags on hooks showing seat assignments within the cabin. A traveler would choose their tag and bring it to the counter for their boarding pass. The savvy traveler would hold back and await the time when all of the economy tags were taken and then approach the counter for a seat allocation. Sent back to the board, the traveler would then bring forth their tag from the business class section and be provided a seat. Never once did it fail, long gone is a practice that travelers enjoyed in earlier time.

Traveling light, without hotel reservations, almost always opened doors of opportunity to mingle with the local populace choosing a very local setting or private residence for accommodation. Arriving into Siem Reap, which was yet to become the magnet for tourism within Southeast Asia as it stands today, one found but a simple airport terminal, one short runway, and the one flight from Bangkok, flown three non-consecutive days per week.

Sightseeing the ruins of Angkor Wat, Ta Phrom, Bayon and other of these magnificent ruins was accomplished on bicycle for many, while others chose private vehicle. Seldom were there more than a dozen visitors at any one site, contrasted in today’s world by the hundreds of tourists who descend upon it in daily procession. The beauty of these monuments has withstood the test of time as their host country understands their value and has done much to keep this treasured destination a viable resource. Spread over miles of jungle forestland, it has absorbed the many visitors who come to view their magnificence and remains to this day a destination worth visiting.

The ruins at Angkor truly remain a must do on the bucket list of travel, and with some heady advice, there are ways to circumvent the vast numbers of visitors that come to visit. One critical factor is not to arrive Friday – Sunday. Junkets arrive on Friday from Singapore, Thailand, Vietnam, China, Taiwan and South Korea that simply overwhelm the ruins on a weekend. Have your guide describe the main entry point for each of the ruins and then direct he/she to take you early on from the back entrance. The first two hours or more you will have that part of the ruins to yourself.

Set your schedule to be at the most important ruin just before the noon hour, when the vast majority of tourists are driven off for lunch. Have your guide begin the exploration when the majority of groups finish and work your way back to their starting point. Be willing to awaken at dawn to capture some of the best photos and be one of the few who arrive on site. Angkor is a remarkable experience as is the local town of Siem Reap, and the genuine friendliness of the Cambodian people.

Given the restrictions imposed on travel these past 2 years, it is incumbent upon the savvy traveler to make reservations well in advance. The pent-up demand for travel will unleash the many who have been awaiting a time for a global resurgence in the many destinations that awaiting the willing explorer. Accommodations and transport will be challenged in those first months to handle the many who wish once again to explore the beauty of new landscapes on their bucket list for travel.