Helping to conquer a health crisis with rather remarkable results. 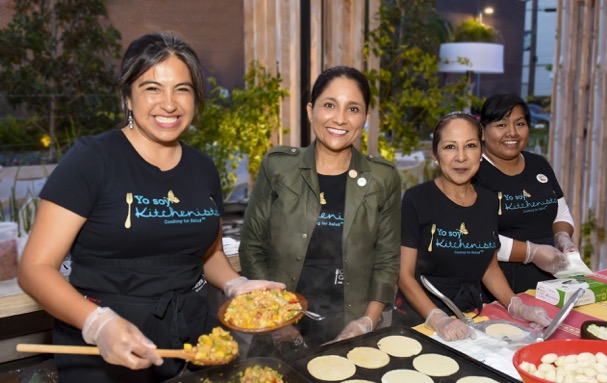 This women led movement of predominately Latinas in National City, San Diego joined together in 2010 to help conquer a health crisis in their lower-income community, resulting in successes that were beyond what anyone could imagine. These were mothers seeking a healthier lifestyle in order to address a personal or family crisis resulting from diabetes, obesity or other health related issues. Together, they attended the inaugural 7-week healthy cooking program titled Cooking for Salud, held at the Olivewood Gardens and Learning Center in National City. Upon graduation, they nicknamed themselves, "The Kitchenistas".
By 2014, there were more than 100 Kitchenistas, who were not only graduates, but also advocates for healthy food in the community. The word was out and there began a year-long wait list to enter the program, and as of 2019, there will be close to 200 who have completed the course, drawing from a diverse mixture of cultures and races, such as Latino, Filipino, White, and soon to be more.
They share a common passion for connection through food and readily share what they have learned with thousands in their increasingly diverse community.
Many of the Kitchenistas, along with volunteer San Diego professional Chefs, are teaching the nutrition classes, and have themselves enrolled in community leadership and public speaking classes to help expand their voices into schools, City Hall and Chamber of Commerce. Several have graduated from a women-empowered business incubator in City Heights and founded healthy food related businesses.
A PBS-broadcasted, award-winning short film, The Kitchenistas of National City produced and directed by Mary Ann Beyster with David Romeo, editor and cinematographer, received national and international acclaim. Both plan to re-visit with Kitchenistas and their families, some five-years hence as they continue with struggles and transformations of personal and family health. Beyster and Romeo envision it to be a feature length film produced as a more comprehensive educational story-telling tool to be used by policy makers, community activists, teachers and students worldwide.
Central to The Kitchenistas film is how these women use the power of food from the kitchen table to Main Street to raise self-esteem, respect, hope and resilience within the community. It is, in fact, a story worth knowing and a story worth telling.
Photography by J. Dixx
J. Dixx Photography